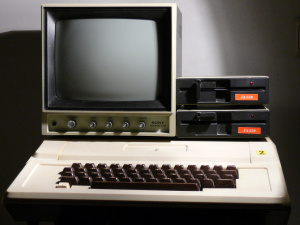 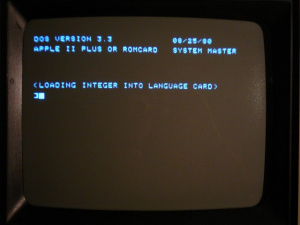 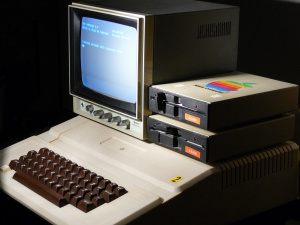 The Kuen Hwa clone, some cards, the Sony monitor and a full height disk drive was donated by the University of Antwerp around 1993. The monitor is rumoured to have been their first computer display. The other computers, the dual diskdrive and some cards where purchased later in the 1990's to replace the broken disk drive. 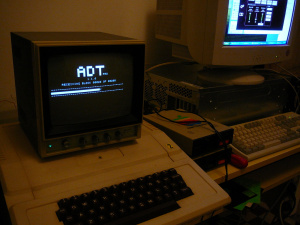 Using ADTPro over the audio/cassette port allows to transfer disk images (.DSK) to and from physical 5 1/4" floppies.

Tons of images can be found here

It takes about 20 minutes for a 180KB disk side, requires trial-and-error adjusting of mic and headphone volume on the PC side and good audio cables. Once it's set up it is fairly reliable.

Upon power-on the Kuen Wha simply shows COMPUTER on the top of the screen and infinitely tries to boot from disk. You can escape to BASIC by pressing RESET.

The ITT starts in monitor.

You are in the built-in system monitor if you see the star prompt:

The apple II Plus has Applesoft BASIC in ROM. A.k.a floating point BASIC, as opposed to the integer basic of the original apple II.

You are in Applesoft BASIC if you see the bracket prompt:

Go into the monitor:

For this you need to boot any DOS 3.3 formatted disk. All disks contain the OS. The OS just adds some extra commands to BASIC:

For this you need to boot a ProDOS system boot disk (not all ProDOS disks contain the OS). Usually a ProDOS disk boots a menu and you can quit to BASIC.

The OS adds some extra commands to BASIC: 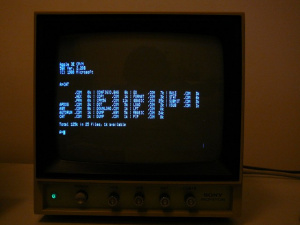 Make sure you have the Z80 card installed and you connect your screen to 80 columns or you don't see anything happening.

Restoration of the ITT 2020

Connected a PC power supply. Reseated the CPU and ROMs. Now it starts up in monitor. CTRL-B brings you to Applesoft BASIC.

Connected the known good disk drives in slot 6 and tried to boot any disk (dos, prodos) by doing PR#6 starts loading but then halts with an error:

Wrote a memory test program in BASIC. This pinpointed that bit 1 of address $5105 and bit 4 of $9000 were stuck on. Translating this to the motherboard layout I knew exactly which RAM chips to replace. I stole them from the ZDucom, they are regular 4116's. Problem solved!

It now boots Prodos etc. But games (using high res graphics) show vertical stripes. I tried replacing the 74LS194 at B4 but it didn't help. I'm guessing that it is actually an incompatibility of the 2020, that it has an 9'th bit in the first 16K that is displayed in highres mode. Using HGR> and plotting in BASIC works fine, but the binary loaded image obviously only fills 8 bits, the 9th bit being random yielding the vertical bars.