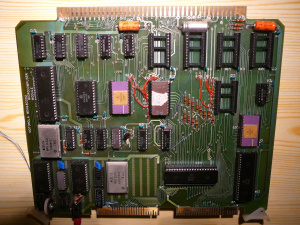 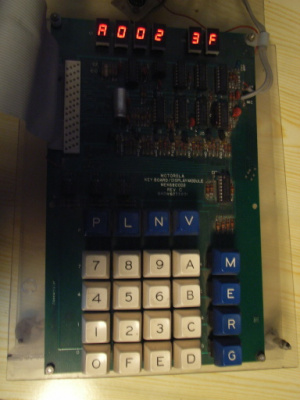 Picked up for free through an advertisement in the early 1990's. Together with the Matra dual 8" disc drive and some other stuff.

The memory module is not yet fully tested. It appears to work but maybe not always, I think I had at least one problem with the lower 16K bank.

The 'punch' function to save to audio cassette, modulates with to high frequencies (the required 2.4 kHz becomes 4 kHz).

Three wires are loose of the added components on the processor module. I don't know where they should go.

I have successfully dumped the JBUG ROM using the cassette out. Type this to Punch addresses E000-E3FF:

Just before the P, start recording a wav file on the PC. The encoding is Kansas City Standard and can be processed using this perl script

Now you have a binary file but it still has some headers and framing. These are documented in section 2.7 of the manual. If you strip those you have the actual ROM and it looks exactly the same as the one on bitsavers

Because the save saves at too high speed, this needs to be adjusted by replaying -40% speed. You can strip off the long mark header to just before the first start bit. For the trailer, you need to leave about 300 ms of marks after the final 'G' character. I don't understand why but otherwise it doesn't work.

Reseated all chips on the memory board. No change.

Found that I simply forgot to connect the -5V and +12V power supply lines that are required by the 4116's...

I tested them all and found only 2 of them to contain any data. I transferred them.

I thought that the load function was broken, but after using the Logic Analyser and clean test input sine waves I found that all is working. Then compared with an actual recording and then found that the frequencies were incorrect. Simply playing a lower speed works.

Fix the speed issue of the punch function.